It’s been an eventful week and a bit since we arrived in Indonesia. When we first arrived, I have to admit I really wasn’t sure whether I’d enjoy my time here. The idea of being somewhere where it was the Australia’s answer to Benidorm really didn’t seem appealing to me. I also wasn’t quite ready to be back amongst the normal holidaymakers having been amongst climbers for nearly a month.

We stayed in Sanur for two nights whilst we waited for my dad to join us for a week. Unless you are heading to catch a ferry, I would avoid Sanur. There’s nothing outstanding about it and it’s festering with locals who pester you to offer their services. Once we landed on Nusa Lembongan, it got much better with the island providing a much more relaxed atmosphere. We originally booked for four nights and ended up staying seven as Ed wanted to do his advanced course as well as his open water. The island (and the neighbouring two islands) are beautiful and are so good for watersports. If you like diving, surfing or just beaches under a blazing sun, this is the place to go.

The islands are stunning, I would highly recommend renting a scooter to explore the island as well as crossing over to the smaller but no less spectacular Cennigan. Although I would not recommend what my dad did which is drive his scooter off the edge of a 2.5m drop… If you do have any mishaps, the East Medical Centre on Lembongan is very good. The treatment rooms are clean, they have good equipment and it’s sterile. Luckily my dad only escaped with scrapes and the need for a couple of stitches for a particularly bad cut. Do take care! Some of the roads on Cennigan are particularly steep and in bad condition and certainly not for the faint-hearted.

Having already done my Advanced PADI, I spent my days mainly surfing and doing admin bits. I’m a complete noob at surfing so it was quite amusing to take on the beginner surf lessons with Thabu Surfing and get absolutely spanked by the waves. The lessons were really good and in my last session I could stand up on most of the waves I caught. At 450k IDR a lesson it’s almost worth doing the lesson just to catch Thabu and his instructors catch waves themselves. The names for the surf spots did make me chuckle though, they were Razors, Lacerations and Playground with the last one being the least friendly so I’m told.

The highlight of our stay on Lembongan was definitely the day of fun dives I did. We went out with Blue Corner Diving who were super great from day one. I saved my day of fun diving for a day with less swell so we could go out to Manta Point. We went out early at 8am and saw dolphins playing in the water as the boat left the reef. The boat trip was fantastic to showcase the beauty of the Nusa Lembongan, Nusa Cennigan and Nusa Penida. We arrived at Manta Point being one of the first boats there and got in the water without delay. Within less than a minute of descending, we saw mantas. Not just one, but about eight to ten of them all together feeding. Throughout the dive, every so often a manta would just zip past you nonchalantly, it did not get old! Considering they were between 3-5m wide, it was definitely a little intimidating at first! What a thrilling first dive of the day. After that we dived at Crystal Bay where I finally saw my first turtle and then at Sen Tal where I had my first proper experience of drift diving. It was a fantastic day.

We’re currently on our way to moving on having spent 25 days at Green Climbers Home in Thakhek. Having only planned to stay for 16 days, when it came to the leaving on our original end date, neither Ed or I felt ready to leave. The climbing was good, but so was Kalymnos and Tonsai. What really makes Green Climbers Home special is the people who turn up there. It felt like an adult summer camp where the days are spent throwing your efforts at the wall and nights are late hanging out with your friends you’ve made. Out of the people we met, I don’t think there was a single person who actually left on the day they had planned to leave which is real testament to the way the place is run. If you go, you will find that you have an entire valley to play with – a climber’s paradise. What was also really surprising was the proportion of people who arrived having never climbed and were there to learn.

I do think some of the grading at the crags are a bit off. Even the 5s and 6as proved to be challenging, more so than at other places we’ve climbed. Also, since I’d travelled for the prior two months with no training or climbing, it really whooped me the better half of the first week we were there. The climbing didn’t get easier, but I did get more comfortable and could climb harder.

My sport climbing goal for 2018 was to do my first 7a. I managed 6c+ in Tonsai in January before running out of time to project a 7a route there. Knowing how relatively weak and out of shape I was when I arrived, I didn’t really have any expectations of being able to climb hard. But after throwing myself continuously at a climb called Schwitzerland, on the eleventh attempt I finally made it. It’s a route with lots of lovely flowy technical moves, something I’d normally be really into but for some reason the climb was very intimidating to me. I’d managed to get to the last few moves about five times before I managed to send it. And even on my send try, I still didn’t quite believe that I could do it. My biggest weakness is currently and has been for quite some time a mental hurdle. Physically the moves actually never gave me too much trouble, my endurance was perhaps lacking a little but I could perform all the moves without trouble. I never felt quite comfortable on it to fully commit though. Whereas on a 6c route I’d projected a week earlier I could happily go for moves and fall without holding back. The emotions when I finally clipped the anchor was undeniable. Nothing else puts me in such a state as climbing does. What made it even better was that the friends I had made were climbing at the crag right next door so some could see me and cheers accompanied my pathetic sobbing. It was the best way to repay their belief in me throughout the days I projected the climb. Now I have the evidence to prove to myself I can do this, hopefully I can climb more confidently in future.

It’s only been two days since we left and already I miss the place, the lifestyle and most of all the people. Every single person who left before we did, I missed them and now I miss everyone like cattle misses their herd when they’re lost. I would definitely like to go back, although it’d be incredibly hard to replicate the time we had. Nevertheless, the 25 days has made my life and memories infinitely richer.

From Inle we got a day bus to Hsipaw which is a little mountain village. For how touristy Bagan and Inle were, Hsipaw is still very much a small hiking town. We stayed at Mr Charles’ which was listed as the only hostel on hostelworld and also booked a two day trek with the travel agent based there (Ko Pee travel).

We had had a lot of recommendations for Mr Bike, however with the fighting in the area, the jungle tree house trek we wanted to do was unavailable and the only one on offer was one including tubing which we did not want. The two day, one night trek with Ko Pee travel was a mere 25,000 mkk as well which was by far the cheapest price we found for a two day trek.

We ended up with an amazing guide called Phyo who was so friendly and funny and absolutely made the trip. The hiking is harder than the Kalaw trip with a lot more ascension on the first day. We did also come across some local militants complete with rifles so had to come back via the same way to avoid the more intense conflict. Otherwise though it was a great trek. The homestay family that we stopped overnight at were so welcoming.

After the trek we got the train from Hsipaw to Pyin Oo Lwin which has got to be one of the most pleasant train journeys I’ve ever done. The train continues to Mandalay after but takes another 8 hours to get there when you can take the bus which is much quicker. We got the ordinary class tickets (which were roughly 65p for the journey) which gave us seats with the locals. The ride was smooth and went through some lovely countryside as well as the amazing Gothiek Viaduct. It’s definitely worth a ride! 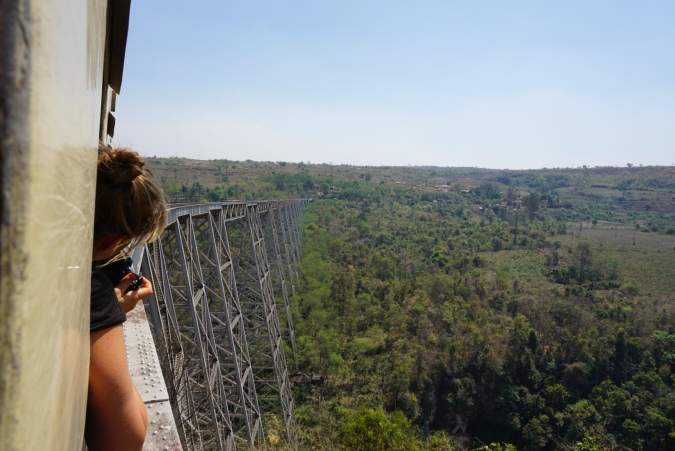 From Pyin Oo Lwin we took a shared taxi (hitchhiking is also an option) to Mandalay.